I can still clearly remember the day. I was working for a Finnish commercial radio station, Sävelradio, by that time. I had done my morning show and just got back from work. We had done an agreement with the bank that day of a loan to by a house from Vihti. Our first child was ten months and second child was to be born in a year or so. My world was full of wonderful promises.

Then it hit us at 3.46 p.m. Finnish time. Radio Nova afternoon host, Kimmo Vehviläinen, told on the radio that there has been an accident in New York. First we thought it was a small plane. The news at 4 p.m. told something more: it was a jet plane, most probably a terror attack. After the news the host told that there has been another attack too. This can't be happening. The rest of the day, the whole world spent by the tv. I was supposed to be on the morning show at 6 a.m. and say something to the people. What can I say? I thought. 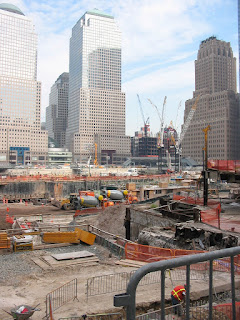 The same question still remains. What can I say? It has been 10 years from that day now. And I still can't tell, what can I say? It's easier to tell the thing to your own kids, but what can you tell as an educator. It's simplier with the war. People fight because they have unsolved arguments. In an adult world it sometimes means that there are wars. It's a tragedy but that's how people are -tragic sometimes. But when it comes to terror, it's a whole other story. We can't explain that that's how people are 'cause we aren't like that. It's an exception. 99,99% of the people on this planet don't do terror. But everyone of us have arguments sometimes.

The Americans have done their job. They have created material for their educators. They have tried to help the teachers on this unbelievably difficult task. They are doing it in their terms. But who would help our educators? Do we have a plan in the phenomenal country of education? It's definately a complex issue but what do we answer when our children ask us: "What happened that day?" I don't know what to say, but one thing I know -we should never forget.

www.911memorial.org Talking To Children About 9/11

Time Magazine's How To Talk To Your Kids About 9/11

Here are some selected other links to 9/11 sites: